How Do You Deal with a Heavy Workload? 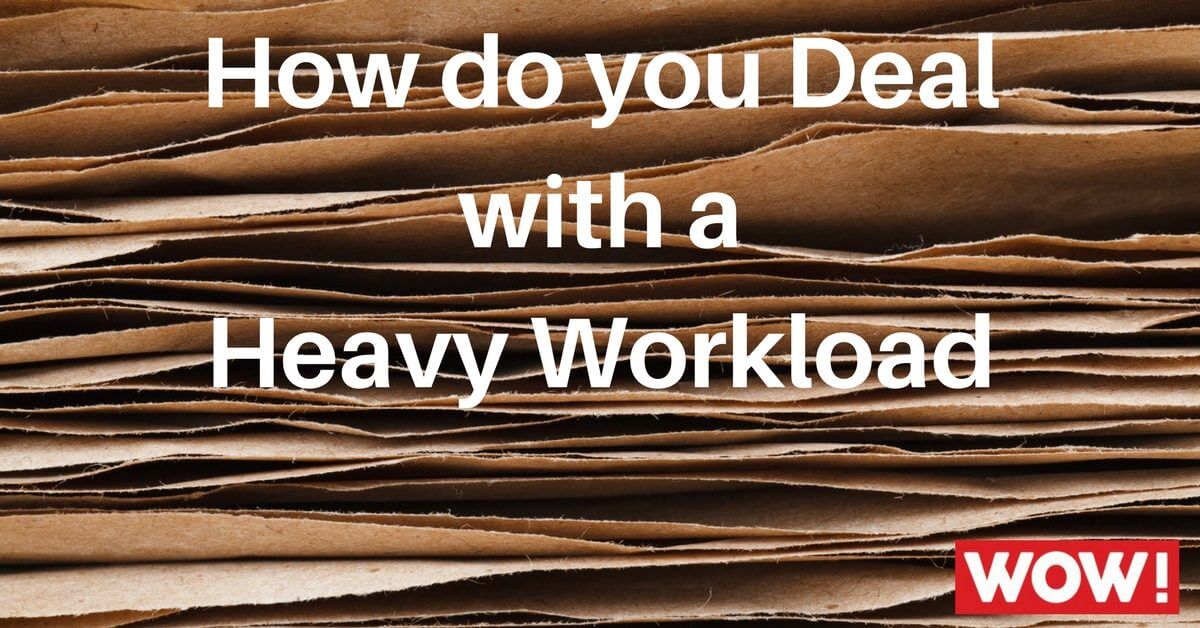 As I learnt yesterday, there’s a lot of you out there working alone, and that can lead to one major issue – a heavy workload!

You’ll be working alone and sometimes you end up taking on too much work simply because you have to. It’s human, so don’t worry!

I’ve got a few tips for you just in case that workload gets too much!

Sit back and relax

I always forget that this is an option, which is why it’s going first!

If you’re starting to feel like the world is mounting up on your desk, just take a step back, relax the shoulders and breathe.

Do what I like to do and make an Excel spreadsheet (because they make everything better) and outline the following:

When you see it laid bare like that, it makes everything look a little more organised, you’ll have everything all in one place, rather than scattered between your documents, your desk and your inbox!

Have a think to when you’re usually very productive, what did you do? Did you go for a walk and then jumped back in?

Try to replicate that again now, and see how you feel!

Head back to the Excel spreadsheet that you made earlier and start to put them in the order of priority.

Maybe you want to get the smallest tasks done first, or the one with the most impending deadline – I’d probably start with that one!

Having that structure in place means that if someone comes over and asks you to do some more work, you can put it in your spreadsheet and prioritise again!

Are you concerned that you might not reach a certain deadline because other tasks are taking longer than expected?

As long as you’ve not left it to the last minute, you won’t be penalised for communicating to the person giving you the work that there’s a small chance it might be late.

If they’re human, they’ll understand – if not, good luck!

No one likes to work for 8 hours straight, which is why having breaks is incredibly important!

Full-time workers have lunch breaks and tea breaks, just because you’re working at home doesn’t mean you can’t have a break!

Once you’ve had those breaks, it means you’ll be much more focused on the work that you’re doing!

Ok so you’ve just finished your break and you’re ready to finish that next task – make sure you do!

Push away every distraction and make sure the next time you come up for air, that task is completed, or at least almost completed!

Don’t even look at your emails, your phone – anything! Just the time…

You can say no

I know everyone hates it, but sometimes it’s almost impossible to take on yet another task without letting someone somewhere down.

In those cases, and after you’ve completed that Excel document, it’s ok to say no.

I mean, if they don’t mind waiting until a little later on, then go for it (and they’ll be lovely) but sometimes you need to put yourself first!

Have you got any tips for getting through a heavy workload? Let us know in the comments!